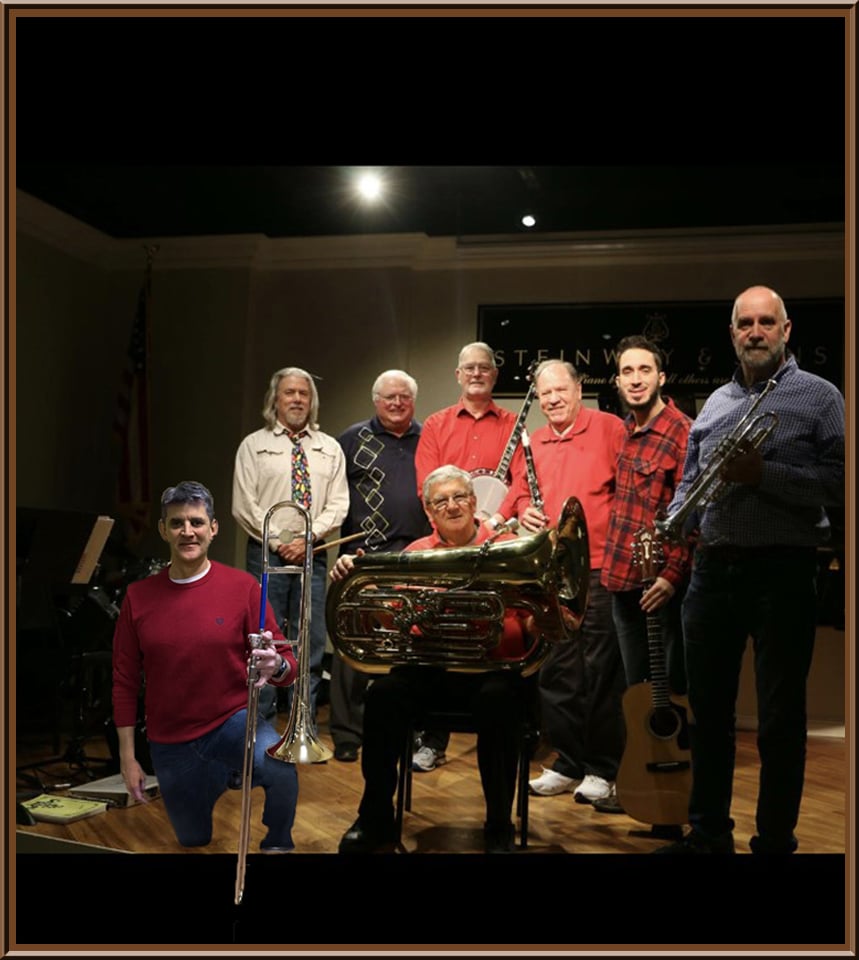 Brad Femmer (Piano): A piano player for over 60 years that studied under Rose Oldani in St. Louis in the 50s and 60s.  Freelance solo pianist concentrating on ragtime and early Tin-Pan Alley music. Entertains at various venues over the years including volunteer entertainment for several nursing homes in and around the St. Louis area, and at the Missouri Veterans Home for the past 6 years.  Together with lifelong friend Pete Zimmer formed the Backwater Stompers which in addition to monthly performances at the Veterans Home has played at Cardinal Nation, the Missouri Athletic Club, and charitable events.

Steve Frioux (Trombone): Steve Frioux began playing trombone at the age of 10 in the heart of Cajun Country – New Iberia, LA. He entered the USAF in 1990 after earning a Bachelors in Music Performance at the University of Louisiana, Lafayette. He has performed with the St Louis Symphony, Martha and the Vandellas, The Four Tops, The Temptations, Clint Black, Jimmy Dorsey Orchestra, Bill Watrous, Buddy DeFranco, Butch Miles, Bobby Watson, Maynard Ferguson, Ed Shaughnessey, and many many more. Steve’s personal musical style is a result of his Cajun/Creole/Funk/Zydeco/Soul/R&B cultural roots from south Louisiana.

Glenn Meyer (Clarinet): Glenn Meyer studied with Charles Camacho of the St. Louis Symphony. Glenn was a member of the St. Louis Ragtimers for over 10 years hosting many nationally known Ragtime and Jazz Festivals aboard the Goldenrod Showboat, during his tenure with the Ragtimers, Glenn also appeared with the band at many Jazz Festivals in the U.S. and Canada, and also TV shows one show being a special for BBC that was filmed aboard the Goldenrod. Glenn toured with Jean Kittrell’s “St. Louis Rivermen” playing Jazz Festivals all over the U.S. and Canada, such festivals as the Monterey Jazz Festival, and festivals in Sacramento, San Diego, Three Rivers, Eureka and Pizmo Beach, California, also appeared 12 years in a row at the Sun Valley Jazz Jamboree in Idaho.

Paul Niehaus (Guitar, Bass): Born and raised in Saint Louis, Paul Niehaus IV has been a freelance musician since he graduated from Truman State University in 2009 with his BA in music with a minor in Folklore. He is proficient in guitar, bass, keyboards, and drums…and has additional experience on harmonica, mandolin, French horn, trumpet, and saxophone. He loves natural and hi-fidelity tones in the studio and strives to cultivate an environment in which artists can get creative and be themselves.

Roy Shaneberger (Tuba): Roy is a retired Human Resources Professional and College Administrator.  He is an original member of the Backwater Stompers.  Roy also plays in the Waterloo Illinois Municipal Concert Band and the Bud Light Brigade.  In addition, he plays upright bass and electric bass in dance bands, stage musicals and church events. Roy is honored to be playing traditional jazz with such a great group of bandmates.

Pete Zimmer (Drums): In 1964, Pete Zimmer’s musical career started at age 12 when he was asked to play drums in a local wedding band called the Classics. Mostly a swing/jazz drummer, he was called on to play piano when his Piano player was drafted in 1973. In 2015 he was asked to play drums behind his good friend Brad Femmer once a month for the Missouri Veterans Home.  Their music was Dixieland/Ragtime/American and the music had a special electricity and spark to it.  Since that time many others that have heard the band have been drawn to the sound and music. In this way they have increased the roster to 8 highly talented professional musicians forming the Backwater Stompers.