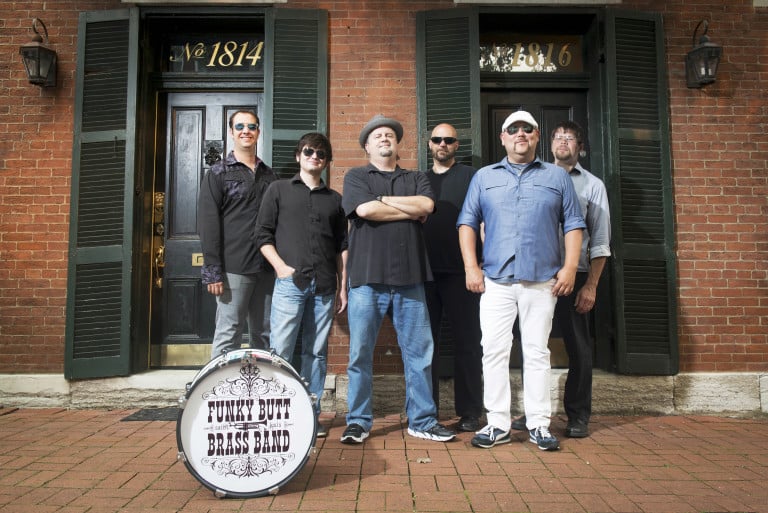 The Funky Butt Brass Band was formed in 2008 by six talented musicians who respect and revere the New Orleans brass band tradition. The FBBB takes classic New Orleans brass tunes and gives them a twist, in the style of Dirty Dozen Brass Band, Rebirth and Bonerama. But don’t be surprised if you also hear some Motown, Southern rock, Memphis soul, Chicago blues and St. Louis R&B in the mix.

The FBBB released its debut CD, Cut The Body Loose, in 2009. The second album, You Can Trust The Funky Butt Brass Band, entered the world in 2011. Both discs capture the wide variety of music and playful spirit the band brings to every live performance. They put out an epic holiday EP entitled Shiny Christmas Balls, and their latest CD, Sugar Sugar Whomp Whomp, featuring nine original tunes and three classic New Orleans covers, was released in November 2014. All CDs are available for purchase at FBBB shows, online at CDBaby.com, and as digital downloads from iTunes.

Cody Henry is the newest member of FBBB. He currently teaches jazz trombone at his alma mater, Southern Illinois University of Edwardsville, where he studied jazz and received a Bachelors and Masters. Cody believes versatility is a strength as a professional musician and therefore plays a variety of instruments in a variety of styles from jazz and classical to hip-hop and R&B.  Along with performing, he is an active jazz clinician, having contributed to Jazz St. Louis, the Birch Creek Music Academy, and the Jim Widner summer jazz camps. He also plays trombone with Wally’s Warehouse Waifs and tuba, with Adam Hucke, in Sophisticated Babies. Cody lives in High Ridge, Missouri with his wife, Tami (also a trombonist!) and their two children.

By day, Ron is a mild-mannered band director and college percussion instructor. By night, he’s a freelance musician, composer and arranger. He is married to Catie, and they live in bucolic Jefferson County with their three lovely daughters. Besides drumming with FBBB and his many teaching responsibilities, Ron stays busy playing rubboard and percussion with the Boudin Brothers Band and the Southside Creole Playboys. He is also an accomplished jazz vibraphonist and is endorsed by Lewi® Customs Cajons and Vic Firth Sticks and Mallets.

Aaron’s musical history goes back to his great-grandfather Pryor Thurman, a hell of a hand on fiddle. At 12, he discovered the trombone and became a “not quite” child prodigy. He was accepted into the music program at SE Missouri State, which led to playing with such legends as Clark Terry, The Temptations and Rufus Thomas. In addition to Funky Butt Brass Band, Aaron plays outlaw country music with Cooter & Hoss (featuring original FBBB member Ben Reece) and provides trombone firepower with various bands around town. With his wonderful wife Erica, young rowdy sons Milo and Hank and a burgeoning musical career, Aaron considers himself one of the luckiest guys on Earth.

Tim experienced Mardi Gras in the late ’70s and attended his first-of-many Jazzfests in 1989, beginning a long-standing love affair with New Orleans music, food and culture. In his non-musical life, he is an award-winning advertising writer/creative director who has created many memorable commercials. In addition to the FBBB, Tim plays guitar and sings with the Boudin Brothers Band. He grew up Harbor Springs, Michigan, a beautiful little town on the shores of Little Traverse Bay, and has a degree in English from Miami (Ohio) University. Tim and his lovely wife Liz live in the Tower Grove Heights neighborhood of St. Louis with a dog (hers) and cat (his) who are trying their very best to get along.

A native of Belleville, Illinois, Austin’s passion for music began at the tender age of eight when he began guitar lessons. Three years later, he picked up the saxophone, which would prove to be his most innate vehicle for musical expression. Having recently attained a Master’s degree in Jazz Studies from Northern Illinois University, Austin is heavily schooled in the craft of jazz saxophone; however, his personal tastes and playing experiences are much more eclectic. Aside from jazz, he is an avid fan of classic Motown, Soul, Funk, Rock, R&B, and many other genres. Austin currently supplements his gigging income by teaching private woodwind lessons in and around the greater St. Louis area.