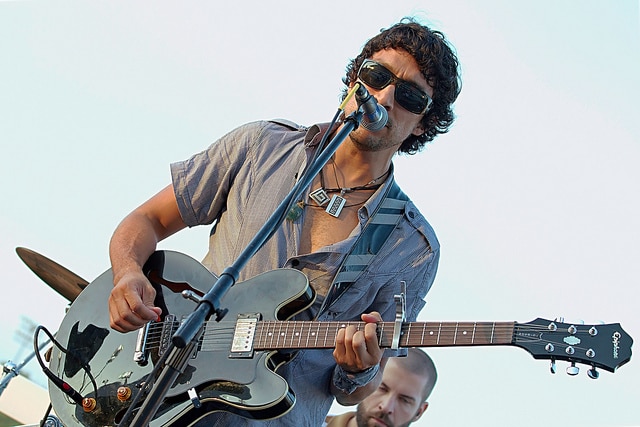 Dedication, perseverance, pure talent, honesty, humility and spiritual power are some of the things that can describe Javier Mendoza and his music. Throughout his twelve-year music career Javier Mendoza has been working hard and gaining fans one show at a time.

Born in Virginia, raised in Spain and Germany, and now living in St. Louis Missouri, Javier continues to create and perform his amazing music.  His creativity and perseverance are easy to see in his evolution from a songwriter for Warner Chappell in 1996 to a full time singer, songwriter, and performer today.

Javier has received many honors throughout his career. He is currently nominated for Best Solo Artist at The 2010-2011’s Riverfront Time’s Music Awards. He was voted Best Male Vocalist by the Reader’s Poll at the 2009’s Riverfront Time’s Music Awards, and also in 2009 KDHX Radio voted Javier Best Latin Artist. Mendoza was a finalist in the Independent Music Awards 2007, won best St. Louis World Music and Pop Artist 2000-2004, became a Budweiser True Music artist in 2005, had songs featured on MTV’s Real World, has multiple magazine features and live performances on several TV shows.

He has also worked with some of the best musicians in the region and shared the stage with the likes of Willie Nelson, Blues Traveler, Everclear, Los Lobos, The Roots, Ben Folds, Idina Menzel, Duran Duran and many more.

With 11 albums spanning 11 years Javier demonstrates that he knows where he comes from and where he is going.  On each CD he combines new influences, new musical inspirations and life experiences with the common thread of hope for the future.

His dedication to creating new and different material and his passion for live performance keeps bringing the fans back again and again.

Whether he’s playing for 10 people or a crowd of 10,000, Javier makes each show unforgettable.  The physical and emotional energy he delivers is truly amazing and must be experienced to be believed.