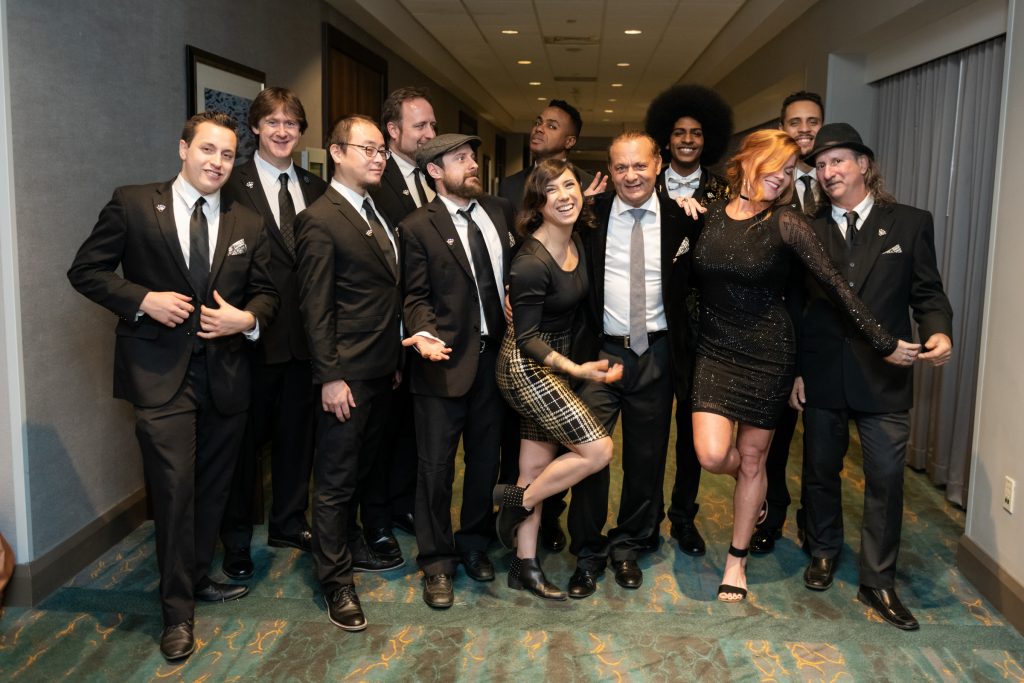 As seen in GQ!

The Sultans, formerly known as The Sultans of Swing, are the evolution of a lifetime of music that started when the band’s founder Jerry Bennett was only four years old.

Born in Scranton, Pennsylvania, Jerry began playing drums, piano and saxophone when most kids were learning their ABC’s. His mother, a dancer and professional piano player, encouraged him to take music lessons. By sixth grade, he had formed his first band and by eighth grade, he was gigging at resorts in the Catskills. After the family moved to New Jersey, Jerry had greater access to the music scene in New York City and his future began to solidify.

Eddie Chamblee and other members of the legendary Count Basie Orchestra would often jam at his house until 4am, letting Jerry play the drums and teaching him invaluable skills.

He was accepted into the prestigious New England Conservatory in Boston, studying jazz percussion. He supplemented his income and honed his bandleader abilities playing on cruise ships, in wedding bands and writing scores and jingles. Some of his best known songwriting work has aired on the soap opera One Life to Live, as well as on commercials for Coke, Pepsi, Levis, Tostitos, Breyers Ice Cream, Jeep, Ford, Maybelline and many more.

Jerry began spending summers on Martha’s Vineyard, performing at weddings and private parties. He discovered a need for quality music on par with the calibre of musicianship he had found in New York City…and The Sultans were born.

The original members included seasoned professionals like Grammy winner Susan Tedeschi, Mark Granfield, Hugh Burrows, Jon Zeeman, Bennett Pastor and Bruce Flowers. Along with Jerry, they often played multiple shows on the same day. To meet the high demand for his music, Jerry expanded the band to become a collection of some of the finest musicians in the country, who play a wide variety of music to suit any style or occasion.

As a true music connoisseur, Jerry tapped into his passion for finding distinctive songs that few other bands were playing.

Behind the scenes, The Sultans are guided by the steady hands of his long time management team, which capably organizes every aspect of production details, business administration and client relations.

Today, about three decades after the band’s inception, The Sultans comprise a family of players whose resumes are staggering. The horn section has jammed with Dave Matthews. The lead singers have recorded with Beyonce, Billy Joel, Sting, Steely Dan and James Taylor. Some have performed with the Boston Pops, others have shared the bill with Maroon 5, the Foo Fighters, Busta Rhymes and Kid Rock. There are finalists from American Idol, The Voice and the X Factor. There are entertainers of no less than five US Presidents.

From Fortune 500 CEO’s to newly wedded brides, from the Red Cross Ball in Palm Beach to the Swan Ball in Nashville to the Crystal Ball in Dallas, to inaugural balls and family parties for names like Obama, Clinton, Kennedy, Bush and Biden, The Sultans have dazzled crowds in every corner of the globe.

Their unparalleled showmanship and heartfelt enthusiasm transport listeners to lofty heights, in every genre of music, from every generation.